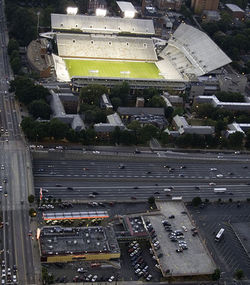 Old, yes. But in fashionable Atlanta, even stadiums get a facelift. Since the Noles last played at Tech, the venerable structure has been expanded to 55,000 seats, with  lower East and North end zone seating areas rebuilt and permanent seating added in the South end zone. If you've been to Tech games before, you'll notice the changes in the photo at left.

Did we mention old? Bobby Dodd Stadium, named after the late great Tech coach Robert Lee Dodd, was built in 1913 and is currently the nation's oldest on-campus stadium in Division I. Fortunately, the latest addition added and/or modernized its restrooms and concession areas.

"What'll ya have!" Maybe the best thing about the stadium is its neighbor across the freeway, The Varsity (the glowing neon lights at the lower left of the photo). For a pre-game meal -- and, what the hell, post-game pig out -- hit the "World's Largest Drive-In." It may be fast food, but it's light years from anything you'll get from a drive-thru window (it's worth a trip for the onion rings alone).

Finding your seats. Visiting fans are mostly stuck in the nose bleed sections of the expanded North end zone. Check here and you'll see visitors seats in yellow. The graphic also shows the numbered sections, so grab your tickets and find where you'll be sitting.

Last but certainly least, the "P" word. Parking. Don't expect anything close, unless you plan to pay. On-campus parking (details and map here) is $15 - $20, and more for an RV. We've been able to park free on campus streets around the baseball stadium (North of Bobby Dodd), and even in residential areas North of campus. Your best bet is to book a hotel in Midtown, giving you a short walk. Or stay in Buckhead or the Perimeter area and take MARTA to the North Ave. station, just a few blocks from Bobby Dodd. MARTA trains are clean, fast and safe, and the fare is $1.75 each way.