Florida State Football: Too Many Chiefs,
Not Enough Indians 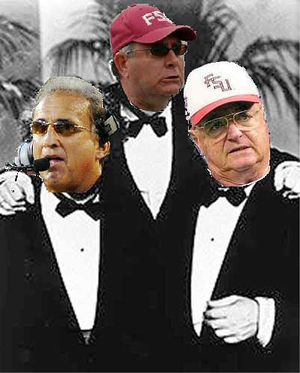 Our guest columnist is an FSU grad and a fan since the early 90s. Ryan shares some inside information on the turf war between certain Nole coaches, confirming rumors many of us have heard. The info comes from a contact who was part of the program. By the way, Ryan also publishes a cool website called The Sportmeisters, focusing on major sports and their fantasy counterparts.

By Ryan of The Sportmeisters

After taking 48 hours to digest Florida State’s latest loss, a 17-7 upset at the hands of Big East upstart University of South Florida, questions arose as to where to put the blame. Some blamed the players for a lack of urgency and focus. Other’s blamed the lack of talent and experience on the field. Some further placed the fault squarely on the coaches. I would consider myself in the third grouping, but its not how one would think. The issue isn’t who we have at the top, but too many of the coaches think they should be at the top.

Now, first of all, I am firmly entrenched in the camp that says Head Coach Bobby Bowden can stay until he is ready to go. The man has earned the right to coach until he drops dead on the field during a game. The man IS Florida State Football, and his way for developing a startup program into the national contender they are year in and year out.

The issue more at stake is the rest of the coaches. Florida State has no less than four coaches with a title of Head Coach in there. There is Bobby Bowden, Head Coach. Mickey Andrews, his longtime defensive coordinator, is his Associate Head Coach. Linebackers Coach Chuck Amato, who was fired as Head Coach at N.C. State prior to returning to the Seminoles, is Executive Head Coach. Offensive Line Coach Rick Trickett also has the Assistant Head Coach title. Finally, Offensive Coordinator Jimbo Fisher is the Head Coach In Waiting. What this adds up to is a number of men who think they’ve earned the rights to be in charge.

The problems all started when Jimbo Fisher took over for deposed Offensive Coordinator Jeff Bowden. After a year on the job, in an effort to keep Jimbo from leaving early, the leadership decided to award him the title of Head Coach In Waiting. It was a positive move on two ends. Firstly, it allowed us to keep Fisher without risk of losing him to another university. Second, it was a strong move for recruiting, in it allowed players to see that there is a transition, and nothing would change.

For the other coaches though, they were none too pleased as they thought they should be in charge. Mickey Andrews has been Bowden’s Defensive Coordinator for over twenty years, and felt the position belonged squarely to him. He has made his feelings aware on the topic, but has said he understood the university wanted to go in a younger direction. For a guy on the way out though (rumor has it this is his last season), wouldn’t he want to make the start of Fisher’s eventual reign even more difficult? I doubt he would, as Andrews is a class act, but it certainly has to hurt that the position he wanted is going to be filled by a relative newcomer to the Seminole team.

For Chuck Amato, he has already been a Head Coach, even winning an ACC Championship while at N.C. State, but was fired after a string of poor performances. With no other team interested, he came back, possibly with the intention of being named Bowden’s successor as well. After all, he has the most experience as a Head Coach in the ACC. His experience is why he was bestowed with the Executive Head Coach title, so it wouldn’t demean the fact he is a positions coach right now. Amato clearly wants the leadership reigns again, and I’m sure would have no issue taking over at Florida State.

Now, my sources inside Florida State have told me there has been strife throughout the last season with the coaches, mainly dealing from the power struggle. This clearly affects their judgment and preparation for the game.  If the coaches can’t work together, the players can’t perform at their highest level.

Until Bowden leaves, though, this cycle will continue. Once Bowden retires, Andrews will go, as will Amato (by choice or by force, one would imagine). This will allow Fisher to stack his coaching staff with personnel he feels comfortable with, who aren’t after his job. Then, and only then, will we see Florida State revert back to their old, dominant ways.