« B.C.'s freshman QB not 100% but confident, plus recruiting updates | Main | An absolute gift from the football gods » 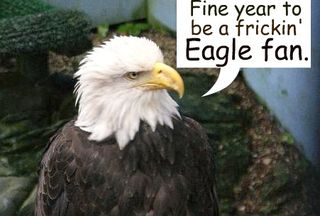 What we know:  Boston College is pretty bad on offense. Many expected the Eagles to struggle a bit and just be average on offense, but they’ve been downright poor, averaging just 18.8 points and 301.6 yards per game. The main culprits have been a poor offensive line and terrible QB play. Things have gotten so bad that some in New England are saying coach Frank Spaziani may have to fire offensive coordinator Gary Tranquill to save his own job.

The QB’s are pretty bad. Many thought Dave Shinskie (618 yards, 48%, 5 TDs, 6 interceptions) was just a placeholder last year and would surely be beaten out this season by younger competitors. However, the coaching staff gave Shinskie the nod despite practice reports indicating that backups Mike Marscovetra and Chase Rettig were more impressive. Many feel Shinskie is as good as he ever will be and Marscovetra (369 yards, 59%, 2 TDs, 4 interceptions) has seen playing time in all 5 games, although he has struggled against BC’s better opponents.

Thus, it appears that Rettig (72 yards, 50%, 1 TD) is the QB of the now and future. The coaches burned his redshirt against Notre Dame and Rettig showed flashes before getting hurt. He’ll likely make many freshman mistakes, but Rettig appears to be BC’s best bet under center.  That being said, Rettig was lightly recruited and isn’t considered an elite talent.

The offensive line has been surprisingly disappointing. While LT Anthony Castonzo is an all-star and has been pretty solid, the unit as a whole returned the second most starts in the ACC (behind only FSU) but has not played like a seasoned bunch. The line has paved the way for an anemic rushing attack that averages just 89.8 yards per game and 2.9 yards per carry. The low point came when BC rushed for just 5 yards against a pretty average Notre Dame defense. Tranquill and Spaziani have used several different lineups to try to fix the problem, but the line is just struggling. Many BC insiders are placing the blame on the coaching staff, figuring that BC still has not recovered from losing OL coach Jim Leach when he left with Tom O’Brien for N.C. State.

The WR corps is just as awful as expected. On paper, BC looked to have a pretty mediocre WR corps and that was before Colin Larmond was lost to injury. Once Larmond was lost, people assumed BC’s pass-catching group would be bad and they have been. The two main problems are lack of experience and lack of a game-breaker.  Ifeanyi Momah (8 receptions, 111 yards, 2 TDs) is the only upperclassmen on the depth chart and he was possibly going to be moved to DE before injuries occurred. Clyde Lee (13 receptions, 130 yards, 1 TD) and Bobby Swigert (14 receptions, 232 yards, 2 TDs) have been productive, but both lack much speed. Speaking of speed, ABC commentator Matt Millen said the BC receiving corps was the slowest he had seen all year during the BC-Notre Dame broadcast. People are stacking the box and daring the Eagles to beat them throwing, but the WR’s can’t consistently get open and the QBs just haven’t been up to snuff.

What we don’t know: Really, the only question marks concern if this team can improve? Will the offensive line start to play up to expectations? Can Rettig improve the passing game? Will Montel Harris (387 yards, 4 average, 1 TD) actually get room to run? If you believe BC fans and bloggers, all of the answers to these questions seem bleak. Expectations about improvement are pretty low at the moment and many think Rettig should be put in there no matter how he does because he is the likely future of the program.

That being said, there is some hope the running game can improve. Harris is averaging a decent 4 yards per carry despite opponents stacking the box. If the line can block a tad bit better, the running game may improve, although probably only slightly.

What we know: Despite giving up 25 points per game, the BC defense is solid. They have gotten no help from their offense and that is a big reason teams like N.C. State have posted high point totals. If you look beyond the box score, though, you’ll see that this unit is still allowing just 2.6 yards per rush. And while BC is giving up about 250 passing yards per game, they are holding opponents to 9.5 yards per completion (the BC offense is averaging 12.5), which is respectable.

As expected, the LB corps is the strength. MLB Luke Kuechly (71 tackles, 6.5 tackles for loss, 1.5 sacks) leads the nation in tackles per game with over 14 per contest. BC has unearthed yet another excellent freshman as true frosh Kevin Pierre-Louis (32 tackles, 1 sack) is second on the team in tackles and has been solid. Mark Herzlich (21 tackles, 1.5 tackles for loss, 2 ints.) has also played well since his much-published return from beating cancer.

The defensive line has surprised. Many expected the BC line to struggle a bit, especially at tackle, but the unit has been stout thus far. Defensive ends Brad Newman (14 tackles, 5 tackles for loss, 3 sacks) and Alex Albright (22 tackles, 7 tackles for loss, 3.5 sacks) have been solid while tackles Kaleb Ramsey and Damik Scafe have combined for 20 tackles and 3 tackles for loss.  The unit isn’t as deep as years past, but has still been productive.

The Eagles can still cause turnovers. BC has picked off 8 passes thus far, with at least one in each game, and recovered 6 fumbles.

Will the pass defense improve? While BC has picked off 8 passes and held opponents to less than 10 yards per completion, opponents are completing almost 65% of their attempts and averaging 253 yards per game. The secondary continues to play a soft zone and offenses that can execute will be rewarded with long scoring drives. BC expects that they can execute their defense better than their opponent can their offense, but if opponents execute and avoid turnovers, this defense can be picked apart.

What we know:  Ryan Quigley is a solid punter, averaging 43.7 yards per punt, with 10 punts inside the 20. Kicker Nate Freese has been better than advertised, hitting on 8 of 10 attempts.

The return units, on the other hand, have been awful. DeLeon Gause and Bobby Swigert have both returned punts, but both are averaging 4.3 yards or less per return.  Gause has done a bit better on kick returns, but that unit has struggled too.

What we don’t know: Really the only question here is if Freese can keep things going. The kicking job was a real headache during spring and summer practices, but Freese has been solid. He may not have a huge leg, but he is 7 of 8 on field goals of 40 yards or less. Can he keep it up?

Overall:  Better luck next year. BC was poised to make a run at the conference title with what was seen as a weak schedule which has very few tough road games and features Duke and Virginia from the ACC Coastal. Instead, BC is on a three-game losing streak and not many around the program see things turning around. In fact, it appears BC may be building for the future, throwing a true freshman QB to the wolves as Rettig is likely to start the remainder of the season.

For the most part, this is a young team with 16 seniors in the two-deep, mostly on the offensive line and at LB. The skill positions are stocked with young players, but BC still looks like they may have missed the boat with a great opportunity slipping away this year. If FSU begins to bounce back under Fisher, NC State becomes consistently competitive under O’Brien, and Clemson remains a solid, if unspectacular, team, BC may constantly be sitting at 3rd or 4th in the division. The Eagles will probably always be a solid 6-8 win team, but this season could be setting them on a dangerous path toward middling bowls and very few ACC championship game appearances.

As for this particular game, unless FSU is simply looking past BC, I can’t see this being a very competitive game. The Eagles are fairly awful on offense and I just don’t see them putting up many points. If they can run the ball and shorten the game, that helps their chances, but I just don’t see BC scoring more than 10-20 points at best. As solid as the BC defense is, I can’t imagine them holding the FSU offense to less than 24 points. I’m thinking a 31-10 type score in FSU’s favor is probably in the cards.