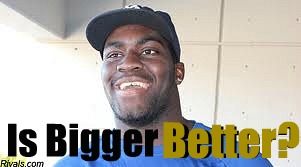 FSU is obviously going after bigger offensive linemen in this year's recruiting class. And they don't come much bigger than Menelik Watson from Saddleback College in Mission Viejo, California. But will his raw inexperience outweigh his intimidating size (6 ft. 7, 310 lbs.)?

Waston, who's from England, has played just one year of football. But Don Butcher, Director of Football Operations at Saddleback, told us he believes Menelik is ready for the big time. Here's how our conversation went.

How raw is Menelik?

"He just learned to play last year. In August we were teaching him stance."

But is he a fast learner?

And you think he's ready for Div. 1 football?

Can you confirm that he took a recruiting trip to FSU last weekend?

Has he made up his mind where he wants to go?